Historically, Fatra was the first company to process plastics in the Czech Republic (formerly Czechoslovakia). It was established by the Bata company upon request by the Ministry of Defence in 1935.

Masks and protective cloths, rubber toys, and technical rubber comprised its first products. Steps were then made towards manufacturing from plastic, starting in 1940. Fatra gradually transferred rubber production to other plants, some of which were under its control at a certain time (e.g. Optimit Odry, Gumárny Zubří), or it helped build others up (e.g. Gumotex Břeclav). Fatra has also shared its experience in processing plastics with other factories (e.g. Technoplast Chropyně, Plastika Nitra), boasting an exceptional record in promoting such development in the Czech Republic.

Over the course of decades, the staff at Fatra have transformed the company, lending it a strategic advantage and forging a leading position in the plastics sector in terms of know-how of the materials and technologies applied, as well as the quality and volume of overall production. It currently also maintains its status as the only producer in the country of certain items, such as pressed floor coverings, waterproofing membrane systems, BO PET films and laminates, rigid floor coverings and breathable films.

The company implemented an integrated Quality Assurance System to ISO 9001 standards in 1994, and, by 2000, it ranked amongst the first firms to comply with environmental protection at ISO 14 001 standards.

Part of the plant is formed by premises in Chropyně. The factory was founded in 1949 and known as Technoplast till 2002, having undergone a major overhaul in the 1960s. Modern technologies afforded Technoplast an exceptional position among domestic producers. A significant exporter, its best-known products from the past decade include BO PET films and thermoformed products.

1940 – Initiation of industrial processing of PVC in the Czech Republic

1949 – Start of production of pressed flooring

1949 – Establishment of the plastics processing plant in Chropyně (Technoplast)

1956 – Inclusion of PE in the production program

1958 – Made the first insulating membrane

1970 – Start of production of PVB film for safety glass

1975 – Inclusion of PP in the production program

1975 – Made a zero series of homogeneous flooring ELEKTROSTATIK

1994 – Quality management system in accordance with the ISO 9001 standard

1998 – Fatra becomes a part of the joint-stock company ALIACHEM

2002 – Launch of the production of breathable films

2003 – Start of production of flooring THERMOFIX®

2006 – Launch of production of injection-moulded products

2007 – Start of production of roofing membranes by extrusion

2018 – Obtaining the certificate “Innovative company of the Zlín region”

2019 – Membership in the association VinylPlus (Recovinyl) 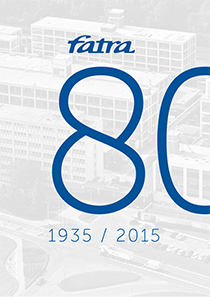